The Counseling and Testing Center was established in 1982 at the University of Central Florida. In its inaugural year, Judith McGunegle provided leadership as the Assistant Director of Testing and Evaluation which was located on the second level of the Administration Building, currently known as Millican Hall. Judith McGunegle and one graduate assistant were solely responsible for fulfilling all roles of the Testing Center for the next several years. Traditional paper-and-pencil testing was the method of test delivery, and UCF students were the primary audience.

In 1987-1988, the Counseling and Testing Center relocated to the Recreational Services building where the Testing Center resided on the first floor. Over the next 10 years, the Testing Center continued to grow as enrollment increased. Large number of examinees taking the College Level Academic Skills Test (CLAST) Florida Teacher Certification Exams (FTCE), and Graduate Record Exam (GRE) were responsible for causing test administrations to expand from a single building on campus to several buildings. It was also during this time that computer-based testing was introduced as a method of test delivery.

With continued rapid growth the Counseling and Testing Center acquired a new location in the Student Resource Center (SRC), currently known as Ferrell Commons, in 1997. Over the next several years, the Testing Center expanded its services to include the computer-adaptive College Level Academic Skills Test (CAT-CLAST) in July 1998 and the College-Level Examination Program (CLEP) on computer in July 2001. With the availability of these tests, there were 6 new computer testing stations added and one new Coordinator position created to oversee computer-based testing. The introduction of CLEP on computer also meant that Testing Center services were gaining exposure in the surrounding community.

In Fall 2002, the Testing Center, formerly part of the testing component of the Counseling and Testing Center, joined together with the Student Academic Resource Center (SARC) to form an organization that provided comprehensive testing and academic support services to UCF students and the metropolitan community. This department was dedicated to helping students achieve academic excellence through a myriad of quality resources available in one convenient location. A “one stop shop” approach served as a benefit to students by integrating Center transitioned within Howard Phillips Hall and expanded to include a technologically advanced Computer Testing Lab with 29 testing stations and a traditional paper-and-pencil testing facility.

Over the next 4 years, the Testing Center continued to increase its programs and services to include the implementation of additional tests such as Accuplacer, Florida Teacher Certification Examinations computer-based tests (FTCE-CBT), a new Foreign Language Proficiency Exam (FLPE) which made testing available to UCF students in over 50 languages in order to satisfy the University’s Foreign Language requirement, and assumed the responsibility of all facets of the College Level Academic Skills (CLAST) requirement. Additionally, UTC continued to expand its services by providing testing during extended hours which includes Monday and Thursday evenings, and select Saturdays.

It was also at this time that the Testing Center began to experience increased visibility in its new location, as well as student and community requests for services continued to grow. Additionally, the Testing Center experienced outstanding success and was recognized for 6 consecutive years (2003-2004 to 2008-2009) as being one of the top 100 CLEP test center in the nation administering the most CLEP tests, presented “From Recruiting to Testing: Developing a Successful Proctor/Supervisor Training Program” at the National College Testing Association (NCTA) conference, and subscribed to the required guidelines in order to be recognized as a participant in the Consortium of College Testing Centers (CCTC).

In Spring 2006, the Testing Center established itself as an independent department known as the University Testing Center (UTC). Over the last five years alone, there has been a 280% increase in the number of tests administered. UTC strives to meet the needs of UCF students, prospective students, alumni, and the greater Orlando metropolitan area by providing a wide-variety of testing services such as ACT (Residual), CLAS Requirement, CLEP, LSAT, TOEFL-iBT and many others in order to foster excellence in higher education and create opportunities for success. 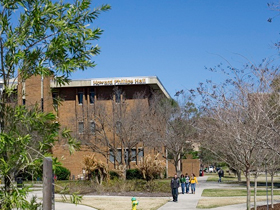